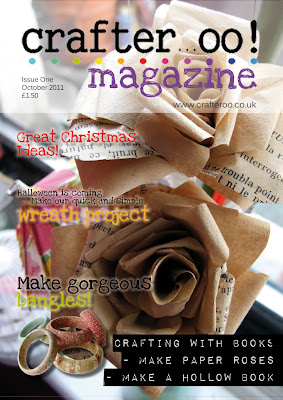 Tomorrow marks the launch of Crafteroo Craft Forum's shiny new online Magazine. I along with the great creative team at crafteroo and especially the Editorial skills of Kerry have worked our fingers to the bone to make the online magazine worth the modest £1.50. The magazine is out tomorrow and is filled to bursting with tutorials, blogs, recipes, reviews and so much more.
I have written book reviews, app reviews, and a recipe for the issue and I would love for every one of my loyal blog readers to visit crafteroo and purchase the magazine for download. It has been a great joy brainstorming and collaborating with forum members to create a brilliant little craft magazine.
The idea of Crafteroo Magazine began with a wish to keep our small little forum running, all sales of the magazine will go towards upkeep of our little forum. Crafteroo is a small UK based craft forum that we started several years ago after several founding members fell victim to cyber bulling on another craft forum and decided to create a happy and safe little forum of our own. I hope that the magazine will do well and it will brink new life and new inspiration to our little craft forum.
Please pop by Crafteroo and say hello and have a little look at the Issue 1 Overview page and see a little of what the 64 page magazine has to offer.
Posted by Apryl at 04:43 2 comments: 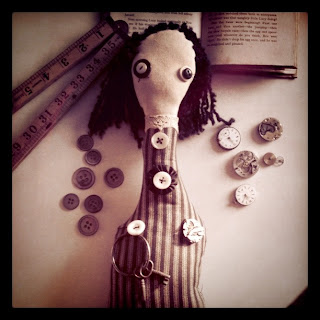 Miss Elmira Ravenhurst was a school teacher in the small town of Doornail in the foot hills of the Serra Nevada Mountains in California. Fourteen years since the discovery of gold, and five years since a steamer ship docked in San Francisco carrying a cargo of death and the end of the world. The ship carried a plague of the living dead. Grey fleshed corpses that should have been buried six feet under, their flesh rotten off the bone as they infested San Francisco feeding off living flesh. Now the country was at war with a plague of un-dead zombies in the west as war raged between North and South.

Elmira had dreams that were broken when her fiancée was eaten by a pack of zombies on a supply run to Sacramento. The children solemnly listen to lectures with wide eyes as she walks back and forth the heavy ring of keys at her side jingle with every step. A bell rings in the distance and Miss Ravenhurst, mouth set in a grim line, uses the keys to open a small door in the tidy little school house. The door opens on a tiny room with a hatch leading to an escape tunnel underneath the town. Elmira ushers the children through, dabbing at tear stained faces as the children march down the tunnels to safety.

Elmira locks the hatch as the last child disappears down into the escape tunnel. The iron key gripped tightly in her hand as she scans the walls of the room. Guns, ammunition, wickedly sharp blades and machines of copper, brass and glass fill the walls. Miss Elmira Ravenhurst smiles grimly as she reaches out for her favourite guns. Miss Elmira Ravenhurst, spinster, teacher, and ruthless zombie hunter stepped out from the school house raised her rifle and aimed as the first zombie shambled along the dirt road. 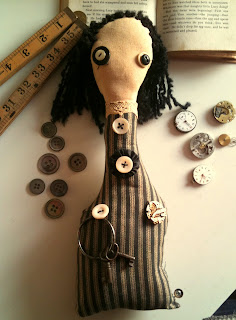 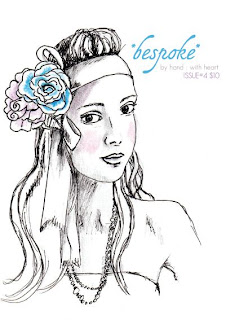 the cover of *bespoke* issue 4
*bespoke* zine is the creation of Jessica Van Den of Epheriell Designs, a blogger, zine publisher, jewellery maker, and all around fabulous lady from Brisbane, Australia. A few months back Jess called on the crafty community to submit ideas for issue 4 of the zine. I said it would be great to do a little piece on drabble writing, something I like to do in my spare time and tend to hideaway on another tiny writing blog. A little while later Jess got back to me saying it was a great idea and can I write up 200 words for the zine. 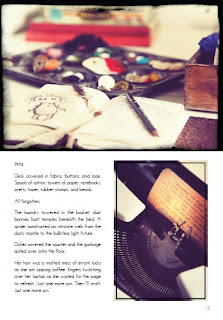 My little bit in the zine
I think my head nearly exploded before I went into panic mode as I dug through my notebook and files to find a few craft based drabbles. I then tried to pull my thoughts together to explain not only why I write them but what drabbles actually are. I was quite possibly a nervous wreck and bothered several of my best friends (Thank you so much) to read through my article before I sent if off to Jess for her approval. Jess asked if I had any photos to include with my drabble article. I didn't but I knew just who to ask. At which point I bribed Matt with promises of cake and chocolate to get him to take some photos of my craft/writing space, dolls and general clutter. I'm pretty sure I still owe him more cake.
So now you must all go out and order issue 4 of *bespoke*, because you all love me very much and want to see what I wrote. Right? Right?
Posted by Apryl at 05:42 5 comments: 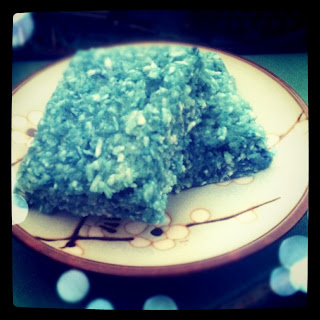 Mix the sugar, dried coconut, and condensed milk together in a large mixing bowl. The Mixture will be quite stiff once thoroughly mixed.

Add a small amount of blue food colouring to the mixture, mix until you achieve an even colour.**

Press the mixture into the pan gently then top and press with the other mixture.

Place in the fridge to set for 30 minutes then cut into small bars with a sharp knife.

Wrap the coconut ice with waxed or greaseproof paper and store in the fridge in an airtight container.

*I used caster sugar as I didn’t have any icing sugar in the house. I like the gritty texture the sugar adds but Matt says I’m weird.

cook's notes: It's a super simple no cooking/baking recipe that I slapped together after reading through several different variations of recipes. In the end I threw everything together and took notes all the while. I may also have got food colouring all over my hands and on my chin... I'm a total klutz. I think there is a room to add a bit more of this or that to alter the consistency of the coconut ice, it is a sticky mixture but by keeping in the fridge it keeps it from falling apart... and it can be hidden behind the lettuce.

Why blue skies? Ever watch Dollhouse? If not you should, It's a reference to something Echo says as Taffy the thief. Yeah I'm a geek, but you probably knew that already. 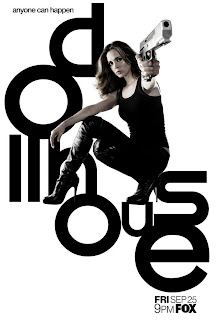