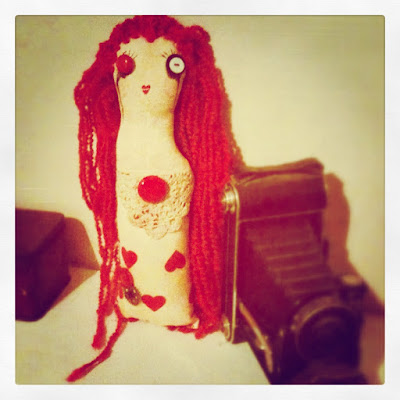 Once upon a time there was a girl in a blue dress that went on an adventure down a rabbit hole. The girl in the blue dress slayed a dragon, killed a Queen, and nearly destroyed a kingdom. This is not her story, but it is the story of a princess who became a girl lost in Wonderland. The girl did not have a name though she sometimes called herself Rowan and sometimes Scarlett. Some say she is a blue blood but she will tell you that her blood is red the same as any. She is said to be the bastard daughter of the Queen of Hearts and an unknown lover of questionable mentality. Upon her birth she was placed in the Wonderland Asylum for Lunatics and the Criminally Insane, some say that madness burns behind her mismatched eyes worse than the blood rage that burned within the Queen herself.

The Princess Scarlett Hart was put away and forgotten by Wonderland, but she did not forget. She is beautiful, serene, a genius, a thief, a sociopath and quite utterly mad. A brilliantly broken and addled porcelain doll. Though no more mad then anyone left living in a broken Wonderland. She is obsessed with locks, and keys, and bright shiny blades. No locks can keep her out or in. She wanders the halls of the Asylum and the City humming, and singing slightly off key in a voice sweet as cyanide laced tarty tarts.

She laughed at the Queen of Heart’s fate and cried for the dragon as she bathed in the pool of tears. She wanders the forest in the day and sometimes takes tea with Hatter muttering about skinning white rabbits to make coats. A mad grin of too sharp teeth flickers across her tear streaked face while playing with her shining knives. On odd days she tells only lies, on even days she tells the truth. In Wonderland all the days are odd.

In your tour of Wonderland you may visit the Wonderland Asylum for Lunatics and the Criminally Insane for a very modest fee. You may even bribe a guard with a nice tarty tart to walk within the garden there. Whatever you do promise me you will be careful to never take tea with a flame haired fury with mismatched eyes, and bleeding hearts upon her gown. The forgotten princess of Hearts may tell you truths or sweeten your tea with honey and gentle lies or serve you sweet cakes laced with laudanum and spite. Or she may follow you home with her shiny blades as she serenades you with sugary sweet songs. 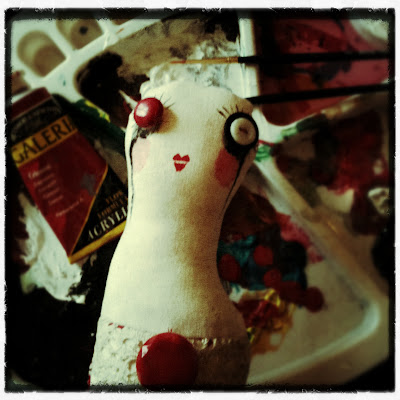 Better pictures soon but the light had already gone when I finished making Scarlett so I wrote down the Wonderland-ish story that was swirling about my head. This is the first doll I have made of the new year and the first doll I have made in two months, I think I may have found a little piece of my crafting mojo. *crosses fingers* I have more writing to do but hopefully I can start on another doll or craft project in the morning while the Boy does whatever he likes, mainly ignoring me until he wants feeding or I want to bribe him to escape the house for a few hours.
Posted by Apryl at 10:28 5 comments: