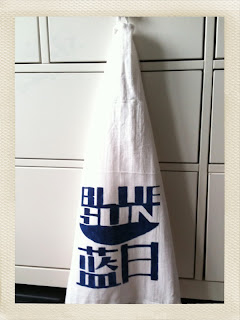 Blue Sun logo tea towel
Blue Sun is the logo for a fictional conglomeration in the Firefly verse. I like to think of it as the Starbucks or McDonald's of the Firefly verse. The logo can be found everywhere on the show, tin cans, ads, and clothing. I love Firefly, in my mind it is the best of Joss Whedon's many brilliant shows. Though very short lived, it was cancelled after 13 episodes, it has a huge browncoat following that made it possible to make the movie Serenity (which I love to bits and makes me tear up every gorram time I watch it). 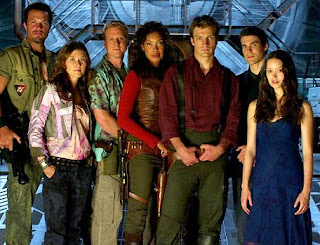 Serenity's Crew
I bought the dvd box set for myself in January and Matt and I sat through every episode grinning away madly (or that might have just been me). I have the the soundtrack on my ipod and have been listening to it quite a bit. And I got chatting on twitter and facebook with other geeks quoting the show. I even wear a Jayne quote pin badge on my coat. Which isn't geeky enough as I felt the need to do a bit more Firefly crafting. 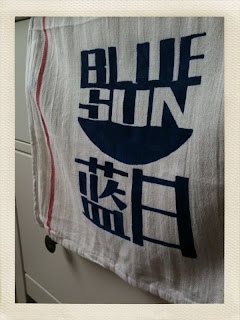 Blue Sun logo tea towel
Last year I bought a roll of freezer paper and its been sitting in my desk being ignored and gathering dust ever since. I have visited Whedoncraft time and again and was inspired by a few stencilled Blue Sun logo shirts. I thought it was time I got round to doing something too. I had Matt print me the logo and spent ages cutting it out with a craft knife, I am quite useless with craft knives in general but I managed not to cut myself and bleed all over my geekery. The tea towel need to be washed a few times so the fabric paint mellows down and fits in more with something found in the verse. I may even boil it in a pan of tea so it has a more aged look. 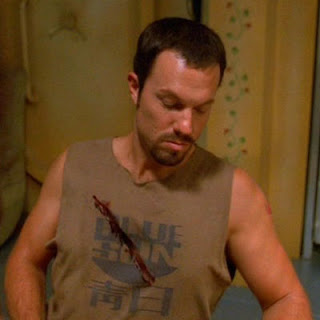 Jayne in his Blue Sun shirt
I want a Jayne hat and a Saffron scarf...unfortunately my knitting skills are lacking and my crochet is akin to making a tumor out of yarn.
Posted by Apryl at 06:26

As you know via Twitter I love Firefly too. A Jayne hat would be very shiny indeed.

Appreciate your making the effort to write this type of valuable post, it's already been very useful.

My husband and I love the Firefly series too! Most of our friends had no idea what Serenity and Firefly were. It's certainly gotten more popular since it ended.