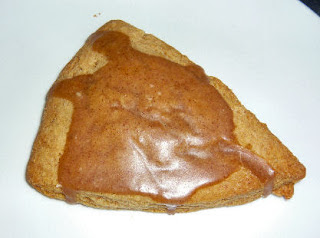 Combine flour, sugar, cinnamon and salt in another bowl.

Combine egg with cream and gently stir into flour mixture until moistened.

Shape dough into an 8-inch round loaf. cut into 8 wedges and separate slightly. Bake for 15-20 minutes or until golden brown.

In a separate bowl, start with the icing (confectioner’s)sugar, brown sugar, and cinnamon and add a little bit of the water at a time until a smooth icing is formed. Brush or drizzle the icing onto the cooled scones

Cook’s notes: these are the first scones I have ever made, they turned out really nice, although M didn’t listen to me and though I had made really large soft cookies, then wondered why I put butter on the one I gave to him. The recipe is my own based on dozens of recipes for different flavoured scones. I was desperate for a Starbuck’s Cinnamon Chip scone that you get in the US but not here so I went my own way and I think it turned out pretty good and the house smell of cinnamon, fantastic.

p.s. sorry about the poor image quality, it was too dark to get a proper picture.

Now I really wish you could e-mail me a piece, that looks so yummy!

They were lovely, but you could do with making them a little less crumbly at the end, dd1 ended up with more crumbs than scone, more binding butter/marg? possibly?