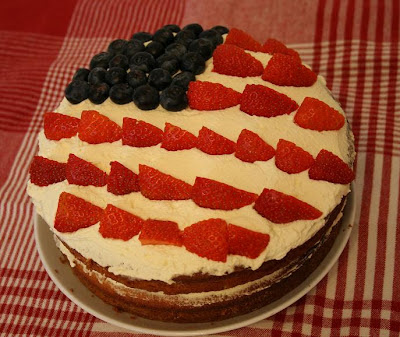 Its that time of year again the great BBQ holiday, or in the case of my house growing up the great barbecue Holy Day! We will hopefully be having a little bit of a BBQ here later I have made a lovely citrus cake that is cooling on the counter as i type this, to be topped in whipped cream with blueberries and strawberries, red with and blue of course.

Today is the day we celebrate America's Independence from British rule. Doesn't really say a lot about an ex-pat American living smack dab in the middle of England, but it is an excuse to bake a cake, not that I really need an excuse for anything other than skipping the gym.

H has a bit of a cold today so he hasn't gone to his swimming lesson in fear that things will turn into the Exorcist and he will cough and puke up his lunch in the pool. again. Hopefully he will feel better after having a bit of a nap but right now all i can hear from him is singing and random chatter from his darkened room. So much for trying to be quite and not disturb him, I guess I'll get the vaccuume out then no more putting it off.

Also on the menu for today is Macaroni cheese, as I haven't got and Kraft mac and cheese, I will have to make do with normal chedder and some relatively orangeish red leichester that is as close as you can get to the love shade of orange that mac and cheese normally comes in.
Posted by Apryl at 05:39