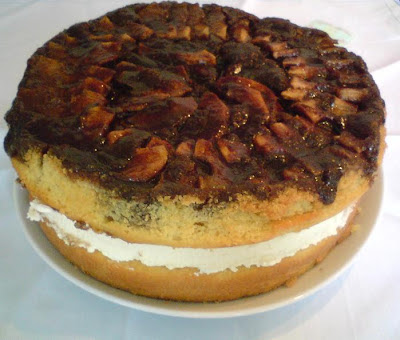 
The recipe for this is essentally the same as that of the original Apple Upside Down cake but this time I took pictures and instead of using my large cake tin, I seperated the batter into two smaller tins, then when the cake was cooled I whipped some double cream that was lurking in the back of the fridge trying to hide until it turned into sour cream. I slatered the whipped cream over the bottom layer of cake and the carefully manuvered the top (upside down layer) carefully over the cream. 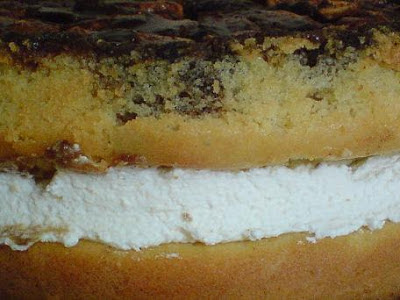 A closer view of the cake

Cream the butter and the sugar together, add the eggs one at a time. Add half of the self-raising flour, then half of the milk and the vanilla.Add the remainder of the flour followed by the remaining milk and beat till well blended.

Melt butter in baking pan in the oven while pre-heating, remove and sprinkle with the cinnamon and sugar mixture. Pare, quarter, and slice the apples thin. Spread in an over-lapping layer on the bottom of the baking dish . Pour the cake mixture over the apples. I'n this instance i used two small 8" cake tins and seperated the batter. The batter will be thick and may need to be smoothed on top with a knife.

Bake at 300° to 325° F. for 45 minutes. Until the cake is golden brown on top and springy to the touch. Leave on a wire rack to cool for 5 minutes. Loosen the sides of the cake with a knife , Cover the cake with a large serving dish or baking tray and turn it out carefully, upside down.