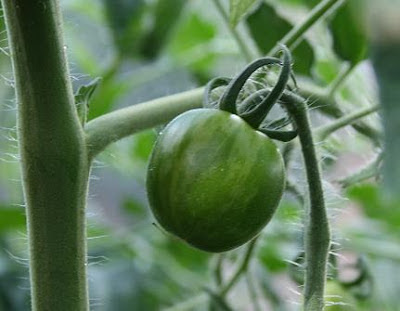 My poort tomatoes have been woefully neglected this past week with everyone having been sick in some way. Poor Starbuck the cat was attacked and his face was punctured in to places, it got infected and was oozing some not very pleasant green pus. Whe had to take him the the vets to get him patched up, the poor thing looked like a monster. 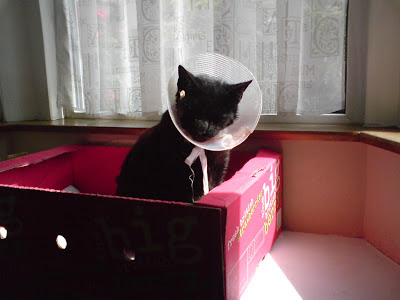 Starbuck as Frankenstien
Starbuck is much better now his wounds are healing nice and cleanly and he seems quite happy again... Well as happy as Starbuck ever gets, he has never really been the life and soul of the party, but he choose us and we choose him so there we are. He is a good cat despite his grumpy disposition, I often wonder why we didn't call him Oscar, as in Oscar the grouch... I will tell the tale of how starbuck got his name in another post, and its a bit more complicated than the coffee place!
Anyway I took care of a poorly cat, a poorly son, and a poorly husband, and just when i thought i was going to be ok I got the virus as well, and am still recovering now, as the cold left me with yet another throat infection which i have had to go to the doctors for and get some penicillin, which is making me feel rather neaseaus, and throw up a few times, but M says I have a weak stomach after all so I shoulden't be suprised.
Anyway my poor tomatoes have been brought back from the brink of withering away several times this past week and seem to keep going on strong, which is good that i haven't killed them, and bad becuse if all those tomatoes do survive its going to be one hell of a crop, I don't know what i'm going to do with them all.
Posted by Apryl at 16:35