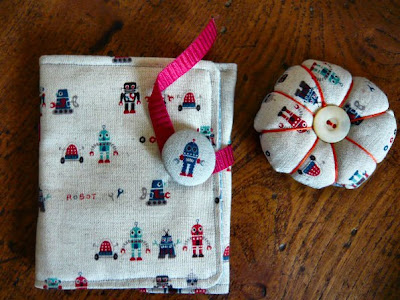 needle book and pincushion
So what seems like years ago, when in actuality is only a few months I signed up for the 2008 Robot Swap hosted by Claire. My swap partner was Annieb we had ages to make robot swap items, or so I thought, with the house move and trying to fix up the Money pit I lost track of crafty swap time and didn't send off my offerings till quite late. I dithered back and forth emailing Annie, my doubts about my robotic creation, (and asking quite a few other people to look at the little robot cushion I made and tell me if it was good enough to send. 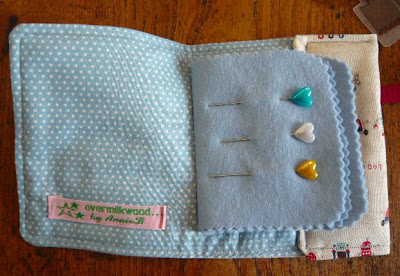 inside the needle book (with a lovely overmilkwood tag)
I sat wringing my hands waiting for Annie to receive my parcel, worried that my little sad robot would be a failure, but Annie said he is loved and isn't quite so sad anymore. Annie assured me my swap was nearly completed, then tragedy struck, the robot pincushion had gone awol. She searched and searched, and accused poor Miss Bester of hiding him away.
But that wasn't the case at all you see, he had run off and hid himself in the vegetable bin. I wouldn't blame him though, just have a look at how badly he was treated prior to being sent to me. I don't know if there is a Charity for robot abuse, but there should be. Annie sent me frantic emails over loosing one small robot, and whipped up another pincushion from the same delectable Japanese robot fabric as the needle book. 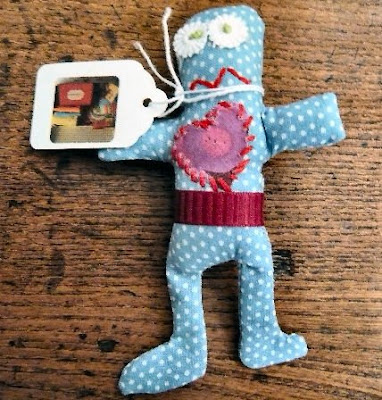 renegade robot voodoo doll pincushion
At the very last moment she found one tiny spotty blue foot stick out from behind some carrots and popped him in a parcel to me. Now I think he dodged a bullet there, if he stayed he might have ended up chopped into the next batch of vegetable soup. Now he is sitting safely and quite happily on my bookshelf near one small brown owl. 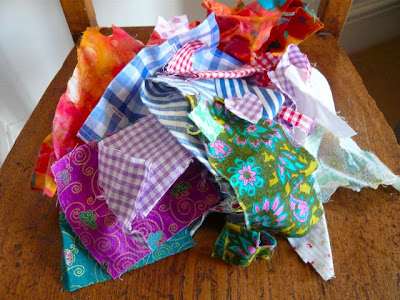 I have placed all my needles in the needle book, though I haven't attempted to sew anything since the robot cushion and the scrap owl. Though I am now in possession of heaps of new scraps to play with as Annie sent me a bag full of brightly coloured scraps. Thank you so much Annie for everything. and thank you Claire for such a great swap. 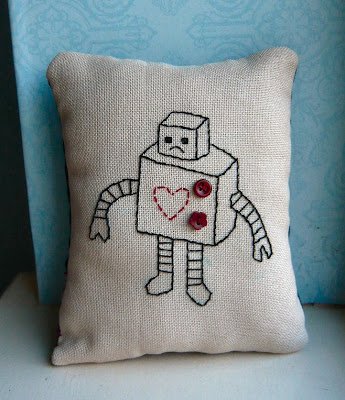 the cushion I sent Annie

glad you like the robot bootie - and that you can find it in your heart to be kind to the runaway - he was lucky to escape alive from here I tell you, after the trauma he caused. We are all still reeling from it! We love your robot cushion, and the painting too. Thanks again, was a lovely swap!